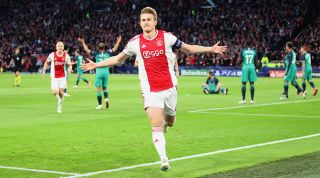 Ajax wonderkid Matthijs de Ligt looked set to be the transfer saga of this summer. Now, his future seems a lot more clear-cut, with reports claiming that the 19-year-old will be a Manchester United player next season.

But for a swing of Lucas Moura's boot, De Ligt would have been leading Ajax out against Liverpool in next week's Champions League final. Now, with Ajax's Eredivisie title confirmed, the topic of his future has come into sharp focus.

Barcelona seemed favourites to win the race for De Ligt's signature, but Spanish paper Marca claim that United have come in with a new offer to eclipse what Barcelona had on the table - said to be in the region of £65m, with wages around £350,000-per-week, instantly making him one of United's highest earners, and the highest-paid teenager in world football.

United are in real need of a central defender, with Phil Jones and Chris Smalling in particular coming in for criticism this season.

Leicester's Harry Maguire and Napoli's Kalidou Koulibaly have also been linked, but the De Ligt rumour now seems to have real substance.

De Ligt has been open about his desire to play in the Premier League before, telling AjaxTV that it has "the greatest footballing atmosphere".

Also, back in January former Ajax striker John van Loen said Manchester United would be "perfect" for him.