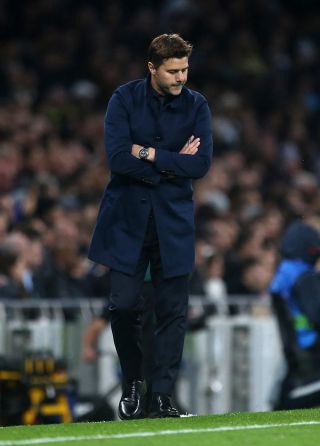 Tottenham boss Mauricio Pochettino is hoping the midweek hammering by Bayern Munich can have a similar effect to a heavy defeat he endured as a player.

Pochettino presided over the heaviest loss of his managerial career when the German champions romped to a 7-2 victory in the Champions League – the first time Spurs have conceded seven goals at home in their 137-year history.

It has deepened the sense that they are in the midst of a crisis after a rocky start to the season and has left the Argentinian fending off speculation regarding his future ahead of Saturday lunchtime’s Premier League visit to Brighton.

But Pochettino is hoping the loss can galvanise his squad in the same way his Newell’s Old Boys side were in the 1990s after a 6-0 loss in the Copa Libertadores.

The Argentinian club, managed at the time by Marcelo Bielsa, shook off that loss and went on to reach the final of the tournament and also won the domestic league.

“We played the first game of the season, and we won,” Pochettino recalled. “Second game was Copa Libertadores against San Lorenzo – 6-0 at home.

“But that season, we finished by winning the Premier League in Argentina six months later – and even reached the final of the Copa Libertadores, only losing to Sao Paulo on penalties after a replay.

“In six months, we changed completely the perception. Sometimes this type of situation makes you stronger and, of course, better.

“That is the most important thing. We need to be clever and learn from this type of situation.

“But we will have to do it in a different way for me now. That was 27 years ago – now it is a different era, a different period of people. But of course, it was an experience.

"It’s going to be tough against Brighton, but we need to be ready and we are going to be ready.”#THFC ⚪️ #COYS— Tottenham Hotspur (@SpursOfficial) October 4, 2019

“I was 19 years old then and how I perceived the situation was different to how I see it now.

“But I remember Bielsa talking to us individually and talking to the collective, making changes and slowly turning around the situation.

“Football changes, society chances, but the principle and psychology is still there 30 years later.”

Several players spoke of their embarrassment after the Bayern Munich game, with Jan Vertonghen saying he was “ashamed”.

Sooo many goals at Tottenham Stadium… which Bayern player is most likely to star in Goal of the Week tomorrow?#UCL | #GOTW | @NissanFootballpic.twitter.com/DswCvvHMSb— UEFA Champions League (@ChampionsLeague) October 1, 2019

Pochettino insists that he and his squad, who have been accused of no longer playing for their manager, are on the same side and are determined to bounce back.

He added: “We all think the same. We were talking before training, during training, after training and at lunchtime, and we all feel the same.

“It’s so painful. You cannot be happy with that defeat. And we are trying to move on.

“They want another opportunity to play and to replay and rebuild the confidence we need to win games.

“But most important is that we know that for 30 to 35 minutes in the first half was our best period in the season.

“One bad result is not going to change our plans. We are so strong in our mentality and ideas.

“In football, you don’t win and you need to assess and analyse everything.

“You will try to find a way to improve but you stick with your ideas and work hard.”