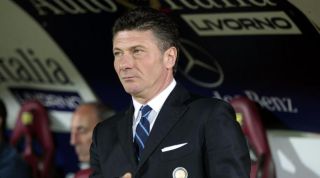 Icardi and Mazzarri appeared to share frustrated words late on in the 0-0 draw on Saturday, which counted as a missed opportunity for Napoli in the race for third spot in Serie A.

The Argentine forward was replaced by Zdravko Kuzmanovic with eight minutes left after apparently suffering from cramp, but Mazzarri insisted that there was little to the exchange.

He told Sky Italia: "I had told Icardi and Rodrigo Palacio, who both had cramp, to run back and help the midfield after Marek Hamsik came on.

"He told me he did all he could and I shook his hand. That's all.

"If Hamsik would've played we were going to put four at the back, so when he came on we had to adjust the midfield. It's not the kind of football I like, though."

It is not the first time that Icardi and Mazzarri's relationship has come under the spotlight, with the Inter coach criticising his player after a provocative celebration against Sampdoria earlier this month.

After another hard-earned point, Inter look set to finish in the UEFA Europa League places but Mazzarri believes that a lack of cutting edge has cost them this term.

"There have been too many draws, many of them recently at home with throwing points away," he added.

"It's a shame, as we played well and couldn't finish the games off."