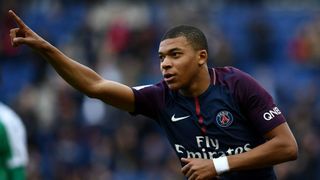 Kylian Mbappe has the talent to be the next Lionel Messi, as long as he follows the Barcelona man's example of respectful humility, according to Samuel Eto'o.

France international Mbappe, still just 19, has quickly established himself as a world star, scoring 26 goals last season for Monaco and another 21 this term for Paris Saint-Germain.

But he still has some way to go before matching Messi and, while Eto'o believes he has the potential, the Barca forward's former team-mate hopes Mbappe develops off as well as on the pitch.

"[Mbappe] is the next Messi, if he manages his status well, if he understands what is happening around his name," Eto'o told France Football.

"There are so many things to take into account to make a great career which have nothing to do with the qualities of football player, even for a player outside the norm. I hope I have the opportunity to talk about this with him one day.

"Kylian can draw inspiration from the superhuman mental strength of Leo Messi, who I saw grow up in Barca.

"[Messi] continues to make games easier by creating things every second. He is unique but remained [the same as] this little kid that I discovered in 2004, respectful, discreet.

"Others guys would have gone crazy in the face of being a global star."