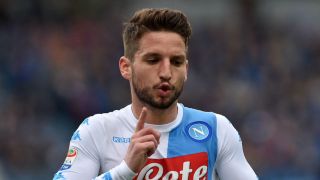 Dries Mertens has signed a new contract that will keep him at Napoli until June 2020.

The Belgium international's previous deal was due to expire in 2018 and recent reports suggested he could be on his way out of the Stadio Olimpico, with a number of Premier League sides believed to be interested in signing the 30-year-old.

Nevertheless, Mertens has now ended all speculation about his future by signing a two-year extension with Napoli, although his new deal includes a clause that allows him to leave for the Chinese Super League for a set fee.

"We sat down with Mertens' representatives on Friday from 2:30PM until 1:40AM and eventually reached an agreement that is perfect for Dries and for Napoli," club president Aurelio De Laurentiis explained.

"Mertens will be with Napoli for many more years so long as he does not want to move to China, because there is a clause in his contract we could not refuse. But in Italy, Mertens will only play for Napoli."

Mertens has been in superb form for Napoli in 2016-17, scoring 33 goals in 45 appearances in all competitions.

The former PSV attacker has netted 27 times in Serie A and is trailing Roma striker Edin Dzeko by one goal in the race for the top scorer title, with Napoli meeting Sampdoria on Sunday in their final game of the season.