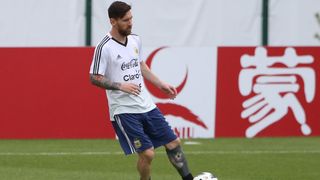 Lionel Messi has all the support of his Argentina team-mates and they will "keep by his side", according to Paulo Dybala.

Messi endured a tough start to the World Cup in Russia, having a penalty saved as Jorge Sampaoli's men were held to a shock 1-1 draw by Iceland in their opening game.

As the 30-year-old looks to bounce back when Argentina face Croatia Thursday, Dybala said the Barcelona star had plenty of support from within the squad.

"Obviously we all support him, there is no need to remember that," he said Tuesday.

"Failing a penalty doesn't mean anything because he is the first one who wants to fix that and revert the situation, and he knows he can count on us now more than ever.

"We are here to help him whenever he needs us, to take advantage from him on each game, and we will keep by his side. This is not going to change."

Messi had 11 shots during the clash against Iceland, but was unable to lead Argentina to victory.

"Obviously we all know how important Messi is not just for us but for the 45 million people back in Argentina," he said.

"We all know how determined he is. Thank God he is the best inside and outside the pitch. He knows how to handle this [the missed penalty], and that is how he kept his level around all these years, breaking all the records.

"But this is football, and we have to thank him because his goals helped us to be here, living this dream."