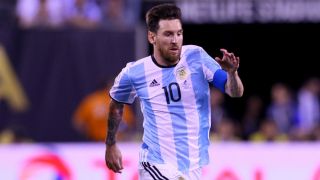 Argentina will have Lionel Messi available again with immediate effect after the remaining three matches of his four-game suspension were wiped by FIFA as his appeal against the sanction succeeded.

Messi was handed the sanction after abusing a match official during the 1-0 victory over Chile in March, ruling him out of the 2-0 loss at Bolivia and their next three 2018 World Cup qualifiers.

But the Barcelona forward's representatives were confident after submitting their case at an appeal hearing in Zurich on Thursday and a FIFA statement on Friday revealed he has been successful.

The appeal committee "considered Messi's behaviour as reproachable" but found the evidence available was not sufficient to enforce the suspension, which the 29-year-old, Argentina and even his club side had vociferously opposed.

"The FIFA Appeal Committee has upheld the appeal lodged by the Argentinian Football Association, on behalf of the player Lionel Messi, against the decision taken by the FIFA Disciplinary Committee, lifting the sanctions imposed on him as a result," read the statement.

"Despite the fact that the FIFA Appeal Committee considered Lionel Messi's behaviour as reproachable, the former concluded that the evidence available was not sufficient to establish to the appropriate standard, i.e. to the comfortable satisfaction of the members of the Appeal Committee, that art. 77 a) of the FDC, according to which the Disciplinary Committee is responsible for sanctioning serious infringements which have escaped the match officials' attention, could be applied.

"The Appeal Committee nevertheless underlines the importance of always showing respect to the match officials, stressing that such a principle is essential in football and any unsporting conduct that may be contrary to the principles of fair play cannot be accepted.

"In view of the above decision, the match suspension imposed on Lionel Messi, which entered into force on 28 March 2017, and the fine of CHF 10,000 have been lifted."

Captain Messi is now available for the matches against Uruguay, Venezuela and Peru that he was previously banned for, along with the final game away to Ecuador.

Argentina, who sacked Edgardo Bauza as head coach after the Bolivia loss which Messi missed, are far from certain to reach the World Cup in 2018 – they sit fifth in South American World Cup qualifying, which would only be enough for a play-off spot.

Chile sit one point clear in fourth and final automatic qualification spot, while Ecuador are only two behind in sixth.