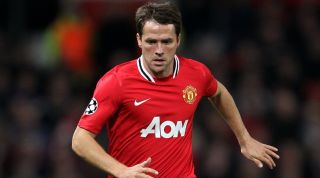 The former England international claims in his new autobiography Reboot: My Life My Time, currently being serialised, that United, Arsenal, Chelsea and Manchester City tried to clinch his signature before he agreed schoolboy terms with Liverpool.

“We went to Old Trafford and Alex Ferguson took me into his office, stared into my face from a distance of about one inch and said: 'Do you want to be a Manchester United player?’" he writes, as reported by the Mail Online.

“It was all so intense - and I didn't know what to say. All I know is that this kind of attention just didn't happen to every young player.

“Without meaning to sound arrogant, I doubt there was a young footballer in the world in such high demand at the time.”

In the end he headed for Anfield, but in 2009, Owen became a free agent at the end of his deal with Newcastle and was approached by Fergie for a second time.

“Obviously I knew him given our shared interest and connections in horse racing, so we probably spent more time talking about racing than football in that first meeting,” he said.

“Strangely, I don't think he ever directly said that he wanted to sign me. It was just assumed on both sides. I left knowing that I was probably about to become a Manchester United player.”