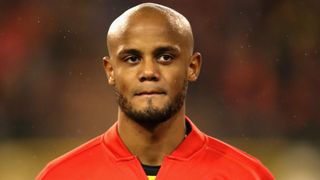 Simon Mignolet is confident the resources available to Vincent Kompany will help his Belgium team-mate overcome a groin injury in time for the World Cup.

Manchester City defender Kompany limped out of the 0-0 friendly draw with Portugal on Saturday and his participation in Russia was immediately thrown into doubt.

Head coach Roberto Martinez has promised to give the 32-year-old until the last possible moment to prove his fitness and included him in the 23-man squad named on Monday.

Los Angeles FC's Laurent Ciman will remain on stand-by until the captain's fate is confirmed, but Mignolet has faith a late change will not be required.

"I have confidence in Vincent and the medical team that, depending on how bad the injury is, he will be ready for when it's necessary," the Liverpool goalkeeper told reporters.

"Laurent is there as well in case Vincent [cannot] make it. We don't really speak about that, let's just let him get on with his recovery and rehabilitation.

"I'm pretty sure he's got all the tools needed at the training camp here to get himself in the shape he needs to be before the World Cup."

Kompany was part of the Belgium squad that reached the quarter-finals in Brazil four years ago.

Their first assignment this time around is against Panama on June 18 before further Group G meetings with Tunisia and England.