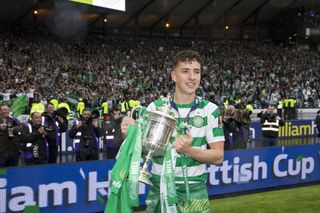 Manager Neil Lennon recently spoke about a “new breed” of Celtic supporters who had known nothing but success, and might not appreciate how special the current era was.

As a first-team player, the trophy count is even more impressive. Johnston, who joined the club’s academy at the age of nine, made his debut in Celtic’s ‘Invincibles’ season of 2016-17, when they completed the first of three consecutive trebles.

But there was no danger of Johnston failing to savour Celtic’s ninth-consecutive domestic trophy after Johnston started in Saturday’s William Hill Scottish Cup win over Hearts.

On being part of a generation reared on success, Johnston told Celtic’s official website: “I probably do fall into that category, but it’s brilliant to be part of it.

“And I think it’s even more important for people my age and younger to really try to take all of this in.

“I don’t think we, the team, the fans, anyone, will properly appreciate what Celtic have achieved these last few years until years to come.

“It’s such a special time for the club, we’ve just got to drink it all in.”

The wide player earned his starting place at Hampden after netting a double in another 2-1 win over Hearts the previous weekend.

The Scotland Under-21 international, who has made 23 first-team appearances this season, said: “I found out I’d be in the team the night before.

“I was more excited than nervous, to be fair, and it’s such a good feeling to win here at Hampden.

“To win the game, the cup, and the treble treble, that’s incredible.”