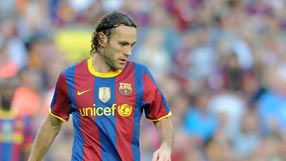 The Argentina international, who has been plagued with injuries in recent years, looked distraught after he pulled up clutching his leg and was forced off just before half-time.

He had earlier scored Barca's second goal in a 5-1 win at the Nou Camp, only his second for the La Liga club and three years after his first.