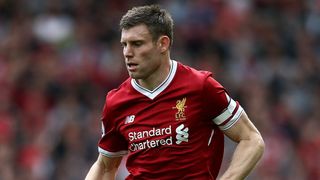 James Milner has a warning for any players wanting to join Liverpool ahead of their European return: Do not sign if the sole reason is Champions League football.

Liverpool are set to play in the Champions League next season, albeit initially via the play-offs after finishing fourth in the Premier League.

Manager Jurgen Klopp has already made it clear Liverpool will invest in quality but Milner wants any potential recruits to move to Anfield for the right reasons.

"It's disrespectful to the club if you say the only reason you are going to Liverpool is for Champions League," said Milner.

"With the history, the manager and the players at this club, it's slightly disrespectful if the only reason you come is that.

"Maybe [we are more attractive] but it's one thing saying you're coming to play in the Champions League and another proving you're good enough to play in it. You have to come here and do the business. It's alright saying you should be in the top four.

"But there are a lot of quality teams fighting for it and in and around it. We have managed to achieve that. Personally the biggest thing for us at Manchester City was winning the FA Cup [in 2011]. When we got that first trophy under our belt, winning something, giving you that belief.

"Last year we came close [to a trophy] but couldn't get over the line but playing in those sort of occasions and in those big games is important. We have proved we can beat big teams in big games, definitely, but it's about keeping the consistency against those teams that come here and sit back."