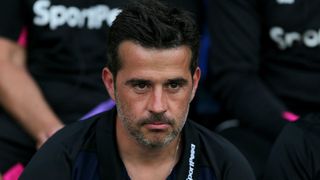 Everton manager Marco Silva insisted the club must sign a centre-back before the transfer window shuts as the Toffees continue to be linked with Yerry Mina and Jamaal Lascelles.

"It is not the best thing to do to wait until the last days but the market is really difficult," said Silva. "When we started we knew more or less what were our targets.

"I know what positions I have to improve and I have started to make more decisions to be sure about everything. But in some positions it was clear in my mind what we needed from the first day.

"Since the first day if I want to put one central defender in the game we don't have any. Mason Holgate has been injured since the first week of pre-season. We lost others [Ashley Williams]. It is one position and it is easy to understand how many we need in that position. We have to sign new players there.

"It is not easy for us as a club to sign some players because in normal situations they ask a lot of money and also we have to make the right decisions. We have to really improve our squad. It is not important if you change 10 players but if you bring in five or six they need to improve our squad."