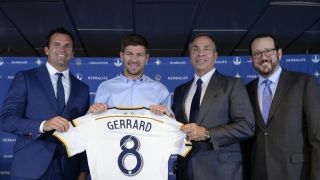 They share 26 European trophies between them and now Steven Gerrard and Andrea Pirlo have joined the growing list of global stars to make the switch to MLS, following in the footsteps of Frank Lampard, Kaka, David Villa and Sebastian Giovinco.

With that in mind, we put together a MLS All-Star XI in a 3-5-2 formation:

GK - Bill Hamid (DC United)
The 24-year-old United States international - voted Goalkeeper of the Year last season - has been a rock for United since debuting six years ago. In 2015, Hamid has kept six clean sheets in 16 appearances for the Eastern Conference leaders, conceding 12 goals in total. Those shutouts have helped the capital club ship just 18 in 21 matches to date and only Sporting Kansas City and San Jose Earthquakes have conceded fewer goals in MLS.

DF- Omar Gonzalez (Los Angeles Galaxy)
In a team headlined by attacking firepower, Gonzalez, another USA international, is an unsung hero in some parts. But the 26-year-old, who is the only centre-back to receive a Designated Player contract in MLS, played a key role as the Galaxy emerged triumphant in 2014. This season, Gonzalez has already amassed 19 appearances, with the defending champions just one point off top spot in the Western Conference.

DF - Jermaine Jones (New England Revolution)
The Revolution pulled off a coup when they lured Jones to New England and it has worked well for both parties. The former Eintracht Frankfurt, Bayer Leverkusen and Schalke utility said he would lead the Revs to the MLS Cup final and he delivered on that promise in his first season. Now the 33-year-old USA international wants to go one step further and you can count on the veteran, who has not let muscle injuries affect his performances in 2015.

DF - Chad Marshall (Seattle Sounders)
Marshall, 30, was voted Defender of the Year as the Sounders won the Supporters' Shield in 2014, following his arrival from Columbus Crew. In a short space of time, the defender has quickly become a mainstay for Sigi Schmid's team, who have only conceded 18 goals to top the standings in the West.

MF - Andrea Pirlo (New York City FC)
They say no Pirlo, no party. Well it is time to party in New York after the 35-year-old Italian completed his move to the Big Apple on Monday. World Cup-winning midfielder Pirlo, whose trophy cabinet includes 16 club trophies - heads to New York fresh from guiding Juventus to a fourth consecutive Serie A crown. He also played a starring role as the Italian giants reached the UEFA Champions League final last month.

MF - Steven Gerrard (Los Angeles Galaxy)
Gerrard - the heart and soul of Liverpool - will attempt to match the on-field impact of former Galaxy star David Beckham as he prepares for a new challenge. The ex-England international ended a 26-year association with his boyhood club in order to link up with Bruce Arena and Co, who are bidding to claim back-to-back titles.

MF - Sebastian Giovinco (Toronto FC)
Giovinco is the highest-paid player in MLS, with his salary eclipsing that of Kaka and even Gerrard. And it is has proven money well spent for Toronto, even at such an early stage of the season. The former Juventus forward has scored eight goals and assisted seven in 16 matches, making an incredible start to life in MLS. At 28, the 21-time Italy international has joined at a good time – and he is showing it.

MF - Frank Lampard (New York City FC)
A 106-time England international, Lampard was for so long the main man at Chelsea, for whom he made over 400 Premier League appearances. He was among the world's best midfielders – and, at times, the number one. His 13-season stay at Chelsea was ended with a move to New York City, and a stint on loan at Manchester City.

MF - Kaka (Orlando City)
The Brazilian showcased himself as arguably the world's best number 10 at times while at Milan, a club with whom he won the Serie A and UEFA Champions League. Kaka spent four seasons with Real Madrid before a return to Milan and switch to Orlando City. This season, he has scored nine goals and contributed two assists in 18 outings.

FW - David Villa (New York City FC)
Spain's all-time leading goalscorer has, as expected, settled relatively quickly in United States. Villa has featured 15 times for New York City and scored eight goals while contributing three assists. He caught the spotlight during his time at Valencia, having scored regularly for Sporting Gijon and Real Zaragoza before that. He spent time at Barcelona and Atletico Madrid before a guest spell in Melbourne.

FW - Robbie Keane (Los Angeles Galaxy)
The Republic of Ireland's impact on MLS has been enormous. Keane's stats tell an incredible story, and he is a three-time MLS Cup winner with the Galaxy. He has played 95 games and his contribution reads a total of 59 goals and 39 assists. The former Tottenham and Liverpool striker has stepped up whenever the Galaxy have needed him, and he now has Gerrard alongside him.