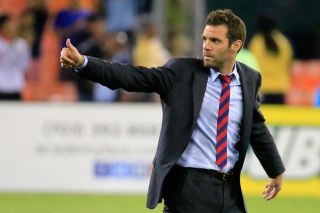 The runaway conference leaders have a six-point buffer on closest rivals the New England Revolution and Sporting Kansas City - both 45 points - ahead of their home clash with the latter.

DC need just one point to guarantee their spot in the play-offs, however all three would virtually rule out a faltering Sporting KC of getting into top spot.

Ben Olsen's men most recently snapped a league slump, winning their first in four in the MLS with a 1-0 result over Philadelphia Union.

Luis Silva, who scored the match-winner on Saturday, said the fixture was the perfect tune-up with only four games to play before the post-season.

"It wasn't the prettiest game, but we got the win, and that's all that matters," Silva said.

"That's how play-offs are going to be. Sometimes we have to grind games out, and I think the team did a good job."

The Revolution, second on games won, are at home to Columbus Crew, who are two points adrift in fourth spot.

A New England win would keep them in contention for top spot, although they will have their eye over their shoulder - with sixth-placed Toronto only five points behind Jay Heaps' outfit.

Philadelphia sit three points outside the top five in the East, but host struggling Chicago Fire on Thursday in a must-win contest for the Union.

Holding fifth spot in the conference, the New York Red Bulls - last-start losers - host Houston Dynamo, who are unbeaten in five heading into the Saturday clash.

Also on the fringe of play-offs contention in the Western Conference are the Vancouver Whitecaps, who are virtually in a one-on-one shootout with the Portland Timbers - one point behind - for fifth spot.

The Whitecaps welcome Dallas, while the Timbers are on the road at the San Jose Earthquakes.

The Sounders travel to the Colorado Rapids in the pick of the Sunday matches, while Chicago Fire host Montreal Impact and Real Salt Lake travel to lowly Chivas USA.