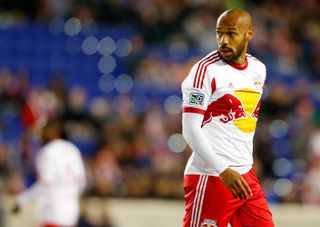 Coach Mike Petke has opted for a 4-2-3-1 and the formation change has helped the Red Bulls go on a four-match unbeaten run.

The last of that stretch was a 4-1 thrashing of the Seattle Sounders as the prolific Bradley Wright-Phillips struck a hat-trick.

"We still give some goals away and easy opportunity for the other team, but I think we're in a better shape playing like this," he said.

"We always, most of the time, have 10 guys behind the ball – nine, sometimes – and it's easier to defend that way.

"We were a bit too open sometimes when we were losing the ball, and having those guys there and also the team working hard, it's better for us."

The Galaxy are top of the West after an eight-match unbeaten run.

DC coach Ben Olsen was rewarded with a new contract on Monday and his side host the Philadelphia Union on Saturday.

The Sounders will be looking for a response to their loss to New York when they travel to Dallas on Wednesday.

Elsewhere, the in-form Portland Timbers visit Toronto and Real Salt Lake will be confident of winning at the Vancouver Whitecaps.

The Columbus Crew take on the Montreal Impact, out-of-sorts duo the Colorado Rapids and San Jose Earthquakes do battle, while the Houston Dynamo meet the Chicago Fire.