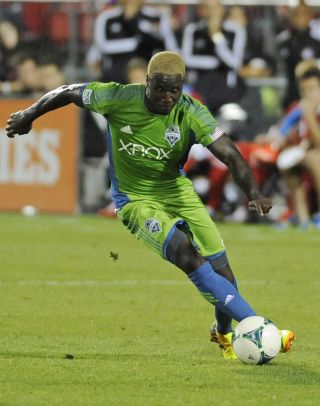 It was a dominant performance by the Sounders who went ahead through Brad Evans in the first half before the sending off goalkeeper Michael Gspurning in the 85th minute made for a hectic ending.

In a knockout wildcard match-up with the winner to face the Portland Timbers, the Sounders got off to the better start with Rapids goalkeeper Clinton Irwin making two superb saves from Adam Moffat and Lamar Neagle early in the half.

This was a sign of things to come as the Rapids failed to adequately clear a cross before Evans latched on the ball on 28 minutes and speared a low shot into corner from just inside the area.

Neagle and former Tottenham star Clint Dempsey combined cleverly to almost double the lead, while the Rapids only managed two half-chances to Martin Rivero in the first-half.

The Sounders started the second half spritely with substitute Marc Burch striking the crossbar with a curling free-kick before their own goalkeeper made some poor decisions late in the half to nearly turn the game in the Rapids' favour.

Gspurning dropped a cross that was nearly bundled in by Colorado in the 68th minute before being shown a straight red with five minutes to go for a combination of handling the ball outside the area and striking Edson Buddle.

Colorado did have a golden chance to equalise with midfielder Hendry Thomas heading over unmarked in the 89th minute before Johnson superbly beat his defender before finishing deftly past the keeper to spark wild celebrations for the Seattle faithful.