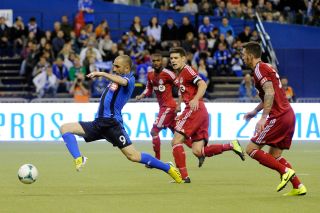 The former Juventus star scored a brace that took his tally to 15 goals for the season - one more than Vancouver Whitecaps striker Camilo Sanvezzo.

The victory saw Montreal leap to the top of the Eastern Conference despite playing two games less than second-placed Sporting Kansas City, who suffered a 1-0 loss at Chicago Fire.

Hunter Jumper scored the game's only goal in the 13th minute.

Real Salt Lake maintained their provisional lead of the Western Conference after a 4-0 home win against Columbus Crew.

A goal right on the stroke of half-time from midfielder Kyle Beckingham set Salt Lake on their way before Devon Sandoval extended the advantage shortly after the break.

Beckingham got his second goal in the last regulation minute after Luis Gil scored a few minutes earlier.

Landon Donovan's third-minute strike was enough for Galaxy to see off the Vancouver Whitecaps 1-0 on the road.

In other games, New England Revolution annihilated Philadelphia Union 5-1, Seattle Sounders secured a narrow 1-0 win over Portland Timbers and there was a 1-1 draw between DC United and Toronto FC.

FC Dallas came from two behind to draw 2-2 against San Jose Earthquakes and Chivas USA clinched a 3-2 win over New York Red Bull.