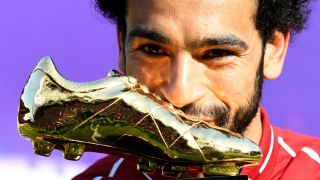 Salah has enjoyed an unbelievable maiden campaign at Anfield following his arrival from Roma – the Egyptian sensation scoring a record 32 Premier League goals and 44 in all competitions.

The 25-year-old's exploits have seen him scoop the Golden Boot, PFA Players' Player of the Year and FWA Footballer of the Year ahead of Liverpool's Champions League showdown with two-time reigning holders Madrid in Kiev May 26, which could decide the Ballon d'Or winner.

However, Klopp insisted Salah has a long way to go if he wants to match Ronaldo's achievements that includes four Champions League titles, two LaLiga crowns and three Premier League trophies among others.

"Mo had a fantastic season, but Cristiano has played 15 seasons like this," Klopp said. "He has scored something like 47,000 goals – crazy numbers.

"Why should we compare? At the time of Pele nobody compared Pele to other players and asked, 'Is he as good as him?' Now we have Lionel Messi and Ronaldo, who have dominated football for a few years.

"Messi and Ronaldo are, in the final moment, very often in the right position to score a goal – and that's the most difficult thing to do in the world.

"That's why they are where they are. The Ballon d’Or is always between them. It’s deserved. When they stop playing football we’ll miss them, 100 per cent. I don't have to make these kind of stories about Salah and Ronaldo.

"It's not about having the better individual. Usually, it's about playing the better football – and, for that, you need all the other players as well."