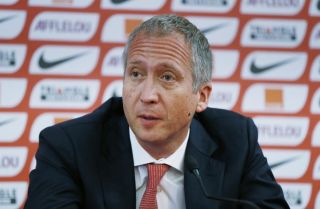 The Ligue 1 side went on a spending spree ahead of the 2013-14 campaign that saw the likes of Radamel Falcao, James Rodriguez and Joao Moutinho move to Stade Louis II.

Despite that heavy investment, Monaco could only place second in Ligue 1 last term and Rodriguez has since secured a big-money move to European champions Real Madrid, while Falcao moved on loan to Manchester United.

Monaco took a more prudent approach in the last transfer window, but Vasilyev did not rule out the possibility of spending big again in the future.

Indeed, the 49-year-old claimed Monaco were in talks to sign a star player from England's top flight 12 months ago, reported to be United captain Wayne Rooney who was rumoured to be unsettled at Old Trafford under David Moyes.

Rooney has since signed a bumper new deal at United last February, and is a key figure in Louis van Gaal's Old Trafford plans, but Vasilyev's latest comments have led to speculation in the British press that Monaco could line up a fresh bid for the England captain.

"One year ago, we were discussing one of the top players of the Premier League, a top English player," Vasilyev is quoted by the Daily Telegraph.

"It was on the table. This opportunity finally did not happen, but I think one day that it will come, that it will happen."

Monaco have started the 2014-15 campaign in inauspicious fashion, taking just 11 points from their opening nine matches and they currently sit 13th in Ligue 1.