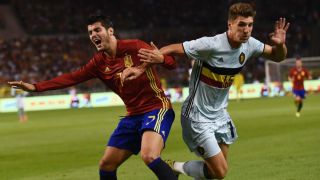 Spain head coach Julen Lopetegui says Alvaro Morata should be fit in time to face Liechtenstein on Monday, despite limping out of the action against Belgium.

The Real Madrid striker was forced off after just 24 minutes of Thursday's 2-0 friendly win in Brussels, prompting fears he could miss Spain's opening World Cup qualifier.

But Lopetegui calmed those concerns, insisting the decision to bring the forward off was made to err in the side of caution.

"Morata suffered a hit and he was about to feel a muscular problem, so we decided to change him for precaution," said the 50-year-old.

"Fortunately, he is alright and he should be fit to play the next game."