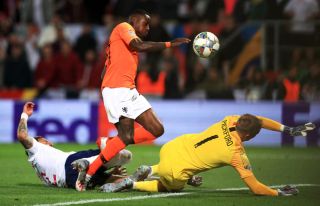 England’s hopes of a first trophy in 53 years went up in smoke in calamitous fashion as dreadful defending allowed Holland to seal a 3-1 extra-time victory and progress to the inaugural Nations League final.

Disrupted preparation was followed by embarrassing fan disorder before Thursday’s semi-final in Guimaraes, where the Three Lions had looked set to seal their place in Sunday’s finale against Portugal and a shot at their first piece of major silverware since the 1966 World Cup.

Marcus Rashford’s first-half penalty was cancelled out by Matthijs De Ligt, but substitute Jesse Lingard sent England fans wild by coolly slotting home in the 83rd minute – a goal that only fleetingly had the country in dreamland.

Video assistant referee Francois Letexier ruled the goal out for the narrowest of offsides and Holland punished Gareth Southgate’s men as they suffered an extra-time semi-final loss for the second successive summer.

Croatia brought their World Cup journey to a crashing end last year and this time dawdling by John Stones put Holland on course for victory.

The defender lost De Ligt for Holland’s leveller and then watched as Kyle Walker turned into his own net under pressure from Quincy Promes having inexplicably given away the ball.

The heartbreak did not stop there as Ross Barkley became the latest to overplay at the back, with his poor touch lapped up by Memphis Depay who squared for Promes to score.

It was a heartbreaking fourth successive semi-final loss that underlines the work still required for Southgate, who now faces the unenviable task of rousing the troops for a third-place play-off against Switzerland on Sunday.

There were some boos from stunned England fans at the end of a gripping clash at the sold-out Estadio D. Afonso Henriques.

The semi-final started sloppily but Holland would eventually settle and threaten to hurt an England backline that was shaking from the outset.

Things appeared to be going one way, only for the normally unruffled teenager De Ligt to miscontrol a backpass and catch Rashford with his hasty recovery challenge. The forward coolly turned home the 32nd-minute penalty.

A last-ditch Denzel Dumfries challenge prevented Rashford grabbing another soon after – a tackle that would bring a premature end to his night, with Harry Kane coming on at the break having been rested along with the other Champions League finalists.

Jadon Sancho wasted a glorious chance to double England’s advantage with a close-range header, while Jordan Pickford saved Walker’s blushes after being robbed of possession by Depay.

Ronald Koeman’s side were unnerving the Three Lions, so there was little surprise when the pressure told in the 73rd minute when De Ligt lost Stones and rose above Walker to head powerfully past motionless Pickford.

Donny Van De Beek fired over as Holland pushed for a winner that looked to have come at the other end seven minutes from time.

Raheem Sterling, who led the side out as captain, flicked Ben Chilwell’s pass into the path of Barkley, whose fine ball put Lingard behind to find the net with a cool finish.

The England hordes erupted as the players wheeled off in celebration, only for the dreaded VAR check sign to be display on the big screen.

After an uncomfortable pause, the goal was ruled out as Lingard was deemed offside by a toe.

Soon Holland were looking for VAR to gift them a winner, with the players surrounding referee Turpin claiming Chilwell had handled a Dumfries strike.

Another anxious wait followed, with VAR adjudging there had not been an infringement.

Kane struck across the face of goal on the turn, with Lingard curling wide and Sterling clipping the bar either side of Depay missing the target after dreadful play by Harry Maguire.

Kane cleared a Virgil Van Dijk attempt off the line in the first half of extra-time, which saw Stones bizarrely dilly-dally on the ball.

Depay took the ball and forced a save out of Pickford and Walker could only put into his own net when trying to prevent Promes.

England looked punch drunk and Barkley gifted Holland a third as his ball found Depay, whose cross was turned home by Promes in the 114th minute for an inglorious end to a challenging few days.