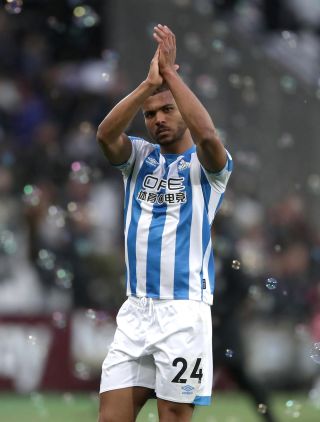 Huddersfield bolstered their blossoming hopes of survival in the Sky Bet Championship with a hard-fought 2-1 win at Hull.

The Terriers were without a win in three matches prior to the all-Yorkshire clash – but after grinding out the victory they now sit six points above the drop zone.

Huddersfield took the lead in the first half through the lively Karlan Grant and despite Richard Stearman scoring an own goal in the second half, Steve Mounie was on hand to grab all three points late on.

For Grant McCann’s Hull, the result leaves them eight points adrift of the play-off pack.

With Kamil Grosicki back in the side and making his first start for over two weeks, the Tigers looked a threat early on and it was the Poland international who nearly set up the opening goal of the game in the second minute, but Reece Burke’s close-range shot was blocked by Christopher Schindler.

Moments later Grosicki flashed a shot across the face of goal, but that proved to be the best chance at either end in a game which largely lacked quality in the opening 20 minutes.

That was until Grant, who had panicked George Long with a looping header, picked the ball up on the edge of the area in the 24th minute. The 22-year-old skipped past Robbie McKenzie and saw his deflected shot wrong-foot Long and nestle in the bottom corner of the net.

Grosicki remained lively and he found himself bearing down on Kamil Grabara in the Huddersfield goal, only for Schindler to get back and smother a certain equaliser.

The Terriers went close just after the break as Fraizer Campbell, making his first appearance at the KCOM Stadium since leaving Hull in the summer, found Emile Smith Rowe on the edge of the box, only for the Arsenal loanee to fire over the bar.

Long was forced into a fine save in the 53rd minute to deny Elias Kachunga from close range.

The Tigers hit back though as Stearman, under pressure from Ryan Tafazolli, bundled Jarrod Bowen’s teasing corner into his own net in the 67th minute.

The equaliser seemed to wake the home side up. Tom Eaves stung the palms of Grabara moments after the goal, before the keeper was forced to tip Jackson Irvine’s bouncing shot around the post.

The Huddersfield goalkeeper was carried off on a stretcher with a serious looking injury after a collision with Schindler – replaced by Joel Coleman – with seven minutes remaining.

However, the visitors won it in added-time as substitute Mounie nodded home from close range.