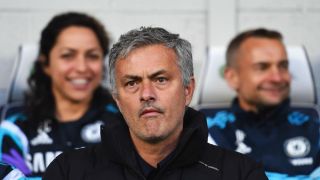 Jose Mourinho refused to be drawn on whether Chelsea will return with a fresh bid for Everton centre-back John Stones.

The Premier League champions had an initial offer - reported to be worth £20million - rejected earlier this month.

Mourinho's public confirmation of the bid irked Everton manager Roberto Martinez, with speculation rife that Chelsea will attempt another move.

However, Mourinho is bullish about Chelsea's pursuit of the England defender.

"I don't speak about transfers now," the Chelsea boss said ahead of Sunday's Community Shield against Arsenal at Wembley.

"Especially now that the competition starts. It starts for us and Arsenal now and starts for everyone else next week."

Mourinho also re-iterated that Chelsea are in the hunt for a left-back to replace Filipe Luis, who returned to Atletico Madrid earlier this week, but is coy on whether Bayer Leverkusen's Abdul Baba Rahman is a target.

Ahead of the match with Arsene Wenger's men, Mourinho stated that everyone is fit for selection, including Diego Costa (hamstring) and Gary Cahill (nose).

Costa had well-documented problems with his hamstring last season, but Mourinho is not concerned by his fitness.

"No [I am not worried about Costa]. We have three top strikers. If one is injured we have two, there are no concerns," he added.

"It's a position where we are very strong. Fantastic group of strikers, no problem."