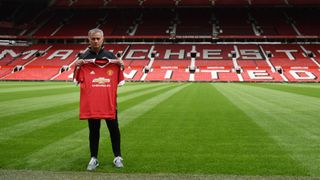 Jose Mourinho says he wants to continue his glorious history at Old Trafford with Manchester United.

Mourinho has had plenty of success at the Theatre of Dreams.

In his first appearance at the storied stadium, he drew with United on the way to a Champions League triumph with Porto, while he has gone on to win there with Chelsea and Real Madrid.

Now, the Portuguese manager is keen to win there as the home manager.

"The first time I managed there it was exactly a dream for me because it was on the way to winning the Champions League with Porto. We scored a goal in the last minute at Old Trafford and made history for myself and my country," he said in an interview with Adidas Front Row.

"So for me there was always that connection that anything is possible, it’s the Theatre of Dreams.

Mourinho has already been aggressive in the transfer market, signing striker Zlatan Ibrahimovic, winger Henrikh Mkhitaryan and defender Eric Bailly, with further reinforcements reportedly on the way as he seeks to return the club to the upper echelons of English and European football.