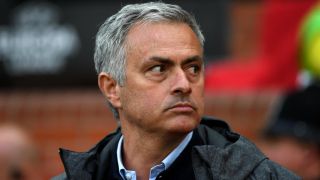 Jose Mourinho says some Manchester United players deserve to rest after making major changes to his team to face Tottenham on Sunday.

United made eight alterations to their starting line-up from the team that edged into the Europa League final against Celta Vigo on Thursday, with Eric Bailly, Daley Blind and Jesse Lingard the only players to keep their place.

Explaining his decision, Mourinho insisted he will continue to make major changes for each of the club's last three league matches up until the final against Ajax in 10 days.

"We are going to do this in this last week, these last three matches we are going to try not to accumulate too many minutes with any one of the players.

Mourinho rejected the argument that United could lose momentum by fielding weakened teams in their last Premier League games.

He replied: "To be honest I think in the Premier League lately the results are not the best - we lost at Arsenal ending that unbeatable run we drew at home to Swansea.

"So I don't think it is about results I think it is more about the condition to arrive in Stockholm in the best possible conditions to compete against a team that today plays their last match and has 10 days without football just to prepare the match.

"I want to give the players the best conditions to try to go to the final."

And the United boss urged the fringe players he has given an opportunity against Spurs to seize the chance to impress him.

"They all know that our game is the final. But the way they perform can influence me positively or negatively so they have to get that as their main motivation.

"If they are motivated I think we can be Manchester United because, even losing like we did against Arsenal, there are certain levels of performance and attitude that we have to keep."