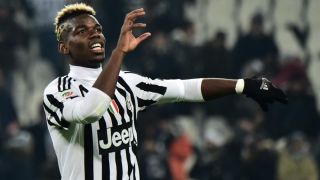 United announced on Sunday the France international had travelled to the club's training ground to complete a medical, with his protracted transfer from Juventus finally drawing towards a conclusion.

Reports suggest United, whom Pogba left in 2012 for a compensation fee of £800,000, will break the world transfer record to re-sign Pogba, with the fee predicted to rise to a staggering €120million, depending on bonuses.

But Mourinho believes the 23-year-old boasts a rare combination of qualities possessed by such Premier League greats as Frank Lampard, Steven Gerrard and Scholes, who retired after United's last title triumph in 2013.

"We have number 10s, we don't have what I call a second midfield player, who is strong enough, powerful enough, but has creativity and scores goals," he told BT Sport.

"Lampard, Scholes, Gerrrard - the second player who sometimes scores more than the number 10 but defends like a number six. They're difficult to find. These three unbelievable players represent that."

Mourinho says his squad have been caught out by the attitude of Ibrahimovic in particular, a player whom he insists is far from the arrogant star some have perceived him to be.

"The other players are surprised," he said. "Not me, because I know him. He's a good guy. He says the words he does for fun. He can go to the kit man and say 'please, give a towel to God', and then laugh, laugh, laugh.