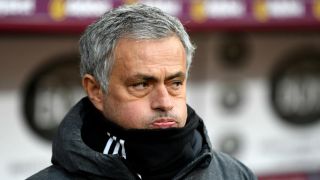 Jose Mourinho insists there would be nothing "entertaining" about a one-sided FA Cup final between Manchester United and Chelsea on Saturday.

United have often been criticised this season for being too defensive, especially in key matches, while Pep Guardiola's Manchester City smashed records for most wins, most goals and most points as they romped to the Premier League title.

It has been suggested the clash at Wembley could be another uneventful affair, with Chelsea having gone through a difficult second season under Antonio Conte and only scoring three times in their last four games.

Mourinho, though, believes a closely fought affair would be far more gripping to watch than a 6-0 thrashing for one side.

"I still don't understand these words of 'entertaining'," he told a news conference. "You think 6-0 is entertaining? I don't think so.

Mourinho boasts a hugely impressive record in major finals, having won 12 out of 14 in his coaching career, including the EFL Cup and Europa League last season with United.

However, the Portuguese does not think his past success gives him any edge over Conte.

"I think the winning mentality doesn't have to do with records or history in finals, honestly," he said. "I think what we did in the past has nothing to do with [Saturday] and the records don't play. What plays is 11 against 11 and everybody trying to give their best."

Mourinho has also made it clear that his assessment of his second season at Old Trafford will not change based solely on Saturday's result.

"When I analyse the work I did and the effort I put in and everything we all did in the club, and that includes the most important persons in the club, which are the players, I’m not going to analyse them because of one very important match.

"But I know the effort, the negative things, and I'm not going to change my analysis of the season because of one match, not at all."

Tributes to Ray Wilkins will be at the  of The Final between and May 15, 2018

There will be tributes at Wembley to the late Ray Wilkins, the former United and Chelsea player who died last month.

His widow Jackie will present the trophy to the winners at full-time, while banners will be displayed in both sides of the ground, and Mourinho thinks the gestures are commendable.

"I think it will be a very emotional moment for Mrs Wilkins and for all the family, for the sons," he said.