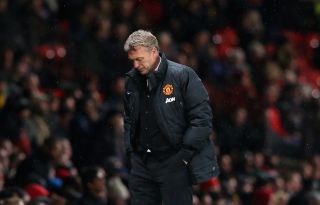 Wilfried Bony's 90th-minute header condemned 10-man United to a 2-1 FA Cup third-round defeat to Swansea City at Old Trafford on Sunday - a loss that marked their fifth at home in all competitions under Moyes' stewardship.

Defending Premier League champions United are 11 points behind leaders Arsenal in seventh place and face a trip to face Sunderland in the first leg of the League Cup semi-final on Tuesday.

And, while Moyes recognises the need for new recruits to ignite his side's fading title defence, the Scot is far from hopeful of adding to his squad this month.

"There's an urgency that we'd like to bring people in," he said. "But are those players available in January?

"There's no point me hyping it up and saying we are (going to add to the squad) because the players we would like to bring are probably not going to be available in January.

"Not because we don't want to do it but because they are not available."

After two consecutive defeats, Moyes is eager to turn around what has been a disappointing start to life in his first season at Old Trafford.

"We put out a really strong team today (Sunday) with lots of international players so everybody is getting their opportunity to show what they can do," he added.

"Hopefully then I'll make my decision from that. The way we are, we need to win so we have to make sure we find a solution to win.