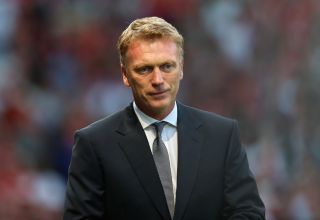 Having managed city rivals Everton and now arch-enemies Manchester United, Moyes is not expecting to be a popular man inside the stadium but admitted that he was relishing the occasion.

United won on their last visit and completed the double over Brendan Rodgers' side later in the season.

The Scot has never won at Anfield, and has only tasted victory on three occasions against Liverpool, but is confident on turning that record around.

"Everybody tells me about the big rivalry between Liverpool and United and it was certainly there when I was at Everton as well," he said.

"I would think I'll get as good a reception as I did with Everton.

"It has always been a difficult place to go, but I am looking forward to going back there."

Moyes also refused to guarantee any new arrivals at Old Trafford ahead of the deadline despite being linked with moves for Marouane Fellaini, Leighton Baines and Ander Herrera.

"I don't know how busy it's going to be but it's a busy football market," he added. "It might be busy in the next few days and I hope we do a little bit of business, but I couldn't guarantee that.

"I wouldn't disclose any names, just let the clubs deal with it and we'll try and do it on a professional manner."