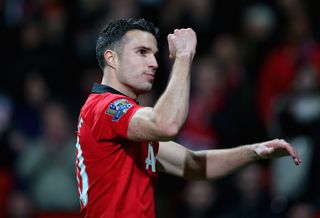 Van Persie has not featured for the Premier League champions since scoring in the 1-0 win over former club Arsenal at Old Trafford on November 10 due to a groin strain.

Moyes confirmed there is no return date set for the Netherlands international but explained the injury was not a cause for major concern.

"I don't know (when Robin will return). We've been trying to get him back for a few weeks," the Scot said.

"But he is not ready yet. It's his groin. It's a sore groin injury and nothing desperately serious."

That capped off a tough night for Moyes, who tasted defeat against the club he left to join United in the close-season.

"I'm disappointed to lose, we missed some opportunities and Everton took theirs. It's a sore one against your old team," he added.

"We have a long way to go, we will need to play some great football and win an awful lot of games."