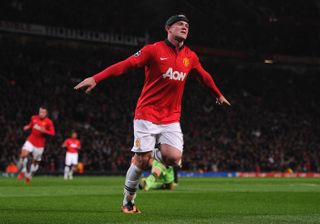 The England international became just the fourth player in United history to reach the impressive 200-goal milestone for the club with a brace against Bayer Leverkusen in the UEFA Champions League on Tuesday.

But Moyes is hoping that his men can continue their steady start to the new campaign, in which they have lost just one of their league games, with a victory at the Etihad Stadium - and he is looking to Rooney for inspiration.

"He's worked hard and is showing exactly what he can do," the manager said.

"If Wayne could score another two goals at the weekend that would be the next step forward. I'm asking him to step up again."

The Scot also confirmed that the derby is just as important to players as it is to the fans, and appreciates that the points could be crucial as two of the major title contenders go head-to-head.

"There is an excitement for any derbies in any big city in the world. They're all really important to your own supporters," he added.

"They're important to the players as well but ultimately it's about what happens come the end of the season and how many points you get together to see who is top.

"These points could be really important towards that, they may not be. We'll go and we'll try and take all the points."