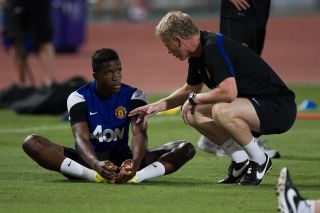 Fabio is expected to sign a permanent contract, while Zaha's switch is set to be a loan deal.

"We're delighted for Fabio because he has been a great servant," Moyes said.

"His brother (Rafael) is doing a great job for us here as well.

"We wish him well.

"He had one or two options but, in the end, we felt we couldn't get him enough games.

"I said to the players, if you feel I'm not getting you enough games, come and see me.

"Fabio felt that, so he's got a move to Cardiff."

Moyes added: "With Wilfried Zaha, I'd said to him during the summer that we wanted to get him games.

"If he played, then great, but if he couldn't, we'd get him out on loan.

"We had one or two offers for him but just felt Cardiff, at this moment in time, might be the right club.

"With Ole going there as well, he knows how the club works here and exactly what we do with the players so hopefully it will be a good move for Wilf."

Zaha has not started a Premier League match for United since moving to Old Trafford from Crystal Palace before the season.

Coincidentally, the two clubs face off in the Premier League on Tuesday, with neither player eligible for the clash.