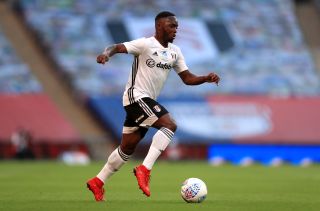 Scott Parker’s side sealed an immediate return to the top flight with victory over Brentford in Tuesday’s Sky Bet Championship play-off final.

Kebano has been a key player for Fulham in the latter stages of the season, scoring five goals in his last five games including a free-kick in the semi-final win over Cardiff.

Kebano told the club website: “First of all, I’d like to thank the club for giving me this opportunity to extend my contract.

“It has been a long journey since we started the season, we have been playing for over a year. We’ve been working very hard which has paid off with promotion to the Premier League.

“I’m delighted for the team, the staff and the supporters, we’ve remained together which has brought us to where we are now.

“I have a lot of affection for this club, for the fans, so it’s natural this decision to sign a contract when this opportunity was offered to me, and I’m very happy to be here for a couple of more seasons.”