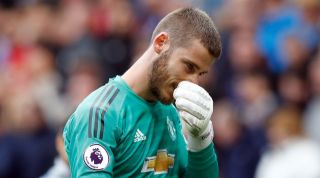 The Spaniard made a costly mistake during last weekend’s 1-1 draw against Chelsea in a key clash for the Champions League race, after previously being criticised for being culpable for Everton and Barcelona strikes.

However, his Old Trafford team-mate underlined that the 28-year-old remains one of the best in the world in his role.

"Players make mistakes in every game and when a goalkeeper makes a mistake everyone sees that," Matic told Sky Sports News.

"When you are one of the best goalkeepers in the world people talk so much about his mistakes.

"I'm very confident that this mistake won't affect his career. He doesn't read newspapers. He is one of the best goalkeepers in the world and will be for years to come. I am very happy to have him in the team.

"He is a great guy, a great goalkeeper, and is probably the best player at United over the last four or five years. He is very focused on his job and is a good character. It's good to have people like him in the dressing room."