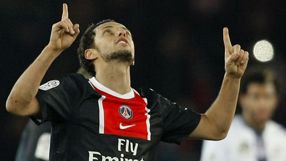 Brazilian Nene, criticised last weekend after missing a couple of clear chances in a 1-1 draw at AJ Auxerre, scored two and set up another as PSG stayed second on 67 points with five games left.

They trail Montpellier, who beat Valenciennes 1-0 on Saturday, by two points.

"We played good football. After a difficult game at Auxerre, our attitude changed. We showed a great state of mind, which was the most important thing."

Champions Lille, who host Paris next weekend, are third on 62 points after a 2-0 win at Dijon on Saturday.

Javier Pastore, who started the previous game on the bench, also showed his silky touch at the Parc des Princes.

The Argentine playmaker, who joined last year from Palermo for a French record 42 million euro fee, slalomed through the Sochaux defence after a fine one-two with Nene and unleashed a powerful shot under the bar after six minutes.

Modibo Maiga headed home the equaliser six minutes later, only for Italy midfielder Thiago Motta to restore the advantage with a headed goal from a Nene cross in the 25th minute.

France winger Jeremy Menez made it 3-1, also with a header, from Siaka Tiene's cross one minute from the interval.

With their teeth firmly in their prey, PSG continued to pile on the pressure after the break.

Nene latched on to a Christophe Jallet cross to put the result beyond doubt in the 55th minute, adding another five minutes later when he caught the visitors' defence snoozing before dribbling past Teddy Richert to score into the empty net.

Olympique Lyon, who have featured in the Champions League for the last 12 years, still have a chance to clinch the playoff round berth as Bafetimbi Gomis netted from point blank with six minutes to go to earn them a home victory.

Lorient stunned their hosts when Kevin Monnet-Paquet put his side ahead after 22 minutes, then Mathias Autret doubled the lead as he chested down a long cross to fire past goalkeeper Hugo Lloris.

Cris put the visitors within Lyon's reach when he volleyed home from a corner kick seven minutes before half-time. Striker Lisandro scored the equaliser on a superb individual effort from the left side in the 77th minute.