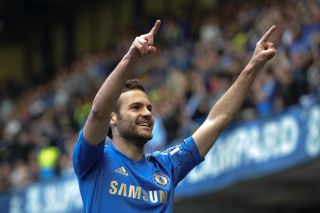 The Chelsea playmaker has cut a frustrated figure at Stamford Bridge this season after starting 11 of his side's 22 Premier League games.

Rumours have circulated that United manager David Moyes could launch a bid in the region of £37 million for Mata in an attempt to reinvigorate the team's flagging hopes of qualifying for the UEFA Champions League.

The defending Premier League champions are seventh, six points adrift of Liverpool in fourth and 14 behind leaders Arsenal.

Neville - who spent his entire 19-year professional career at Old Trafford - originally told Sky Sports that he does not believe the Spaniard fits the traditional mould of a United player, but believes he could provide fresh impetus to the squad.

He posted via his official Twitter account: "My quote - 'Does he fit with what I would call the typical philosophy of Manchester United?' I would say no. Not he won't fit.

The 38-year-old had questioned where Mata would play should he join United, suggesting Moyes would have to employ a new system.

"Maybe they have to change the philosophy and maybe that's what David Moyes is thinking. Maybe he wants to play narrow wide players and maybe a three in midfield."