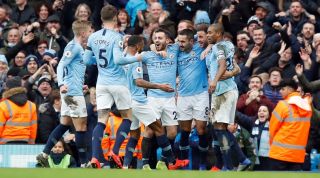 Pep Guardiola’s side climbed to the top of the table on goal difference after an extraordinary 6-0 dismantling of Chelsea on Sunday, but the Reds have a game in hand.

The result came on the back of impressive wins for City over Arsenal and Everton, while Jurgen Klopp’s team were held to draws by Leicester City and West Ham before returning to winning ways against Bournemouth on Saturday.

Neville, who won eight league titles with Manchester United as a player, believes recent performances have shown why the Citizens are heading towards a successful defence of the championship.

"Manchester City have set themselves a standard in the last week,” he told Sky Sports.

“If they are going to win the league they need to maintain that standard every week because they can't afford to make mistakes.

"Liverpool are a very good side and they will realise they are in for a major battle. Liverpool were seven points ahead a few weeks ago, but now City are definitely favourites for the title from what I am seeing.

"Sergio Aguero has lifted City in the last month. He has grabbed games by the scruff of the neck and has been a champion player. He is standing up. If City are going to win back-to-back titles I think they can look towards the last month and think about his influence, he has been outstanding.

"If you look at the size of Liverpool and the fact they haven't won the title in so long, there is an air of desperation at the club to win the title.

"A few weeks ago, they were seven points clear and when Manchester City lost at Newcastle you thought it was there - what an opportunity for Liverpool that was. They still have that chance, but it has become a lot more difficult in the last week."