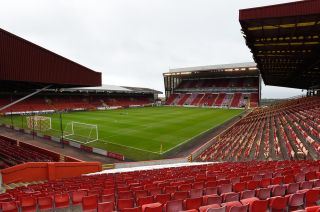 Ronald Hernandez hopes his Aberdeen switch can be a stepping stone to an even bigger move.

The Venezuelan international joined the Dons on deadline day after Derek McInnes splashed out a six-figure fee to land him from Norwegian side Stabaek.

The 22-year-old started his career with Zamora in his homeland before making the bold decision to swap South America for Scandinavia while still a teenager.

But having crossed the Atlantic to follow his dream, the full-back believes he is one move closer to the big time after deciding to make Pittodrie his latest stop.

Hernandez said: “In my life I have pushed to achieve my dreams. It’s not a secret. As players from South America we want to play for the biggest teams in the biggest leagues. I believe in the process because this is the right step for me on to the next one.

“Everything about the move (to Aberdeen) was fast. I was training with my old team in Norway. I spoke to my agent who explained everything to me, step by step.

“I started to read and do research into Aberdeen and then I decided I liked it and would come to Aberdeen to play.

“I need to believe in the process. After the Under-20 World Cup (where he represented Venezuela), I moved to Norway. It was my first destination in Europe. I didn’t even speak English when I moved there. In the beginning it was a bit tough.

“I have this opportunity and I am looking forward to it.”

Hernandez admits he is stepping into the unknown in Scotland – but he is sure he can handle the Ladbrokes Premiership following his Norwegian experience.

The 15-cap defender said: “I honestly don’t know a lot about Scottish football, but I am getting into it.

“I spoke to Fernando De Ornelas, who was a Venezuelan player who played for Celtic. I met him two years ago when I moved to Norway. He told me about Scotland.

“I have heard that it is a physical game in Scotland, but it is also physical in Norway.

“I want to enjoy my time here. I have not been to Scotland before, this is my first time. I have only been to London for one night before.

“But it is a long contract and I will take it step by step.”

Hernandez was left on the bench as Aberdeen earned a point at Ibrox on Saturday but hopes to make his Reds bow in front of the Pittodrie faithful on Wednesday.

He said: “I am very excited. We are in the second half of the season.

“It would be nice to make my debut against St Johnstone. I am waiting for the opportunity. The coach has the final decision.”