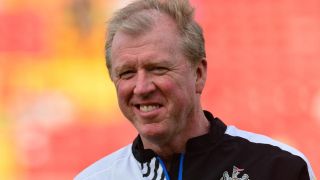 Newcastle United's scratchy pre-season form continued as they suffered a 2-1 loss to Club Atlas on Tuesday.

Steve McClaren's team, fresh from beating Gateshead 1-0 on Friday, were unable to complete a comeback after conceding twice in the opening 17 minutes.

Gonzalo Ruben Bergessio netted a brace at Miller Park in Milwaukee, Wisconsin, to give the Liga MX side a dream start.

Moussa Sissoko pulled a goal back for McClaren's men before half-time, but the Mexican side managed to hold on.

But instead it was Atlas who made the better start, Bergessio scoring from the penalty spot after being brought down by Jamaal Lascelles.

It was 2-0 in the 17th minute when Bergessio struck again.

Sissoko and Cisse combined to set up the former for a Newcastle goal, which came via a neat finish from an angle, in first-half additional time.

Newcastle had their chances after the break but were unable to find an equaliser as Atlas held on.

McClaren's side face Sacramento Republic at Bonney Field in California on Sunday.