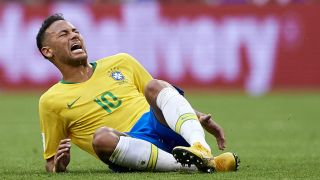 On the eve of the 2018 World Cup quarter-finals, this situation represents a perfect scenario for Neymar's naked ambition. It makes the me-against-the-world funk in which he is lurching through the tournament all the harder to watch.

The ideal of what Brazil represent on football's biggest stage – the flair, trickery, creativity and ingenuity of 'O Jogo Bonito' – is sometimes a fair degree removed from reality. For the past 30 years, their best teams have come packing a pragmatic punch inside the velvet glove.

But Brazil's best players are generally the world's favourites. From Pele and the heroes of that first golden age such as Garrincha and Rivelino, to Falcao, Socrates, Zico and the best team never to win the World Cup in 1982, up to and including Romario, Ronaldo, Rivaldo and Ronaldinho. Brazil's brightest talents have always felt like they belong to all of us.

Anti-heroes were for other nations, those many delight in seeing fail. Argentina great Diego Maradona, for example, faced and still faces ill-will from far beyond the borders of Brazil's neighbours. For the Selecao's number 10s, there has generally only been admiration.

All of which means that at this magnificently celebratory World Cup - where Kylian Mbappe ripped up the script majestically in the last 16, where England and Croatia find themselves at opposite ends of cycles brimming with possibilities and the hosts are still upright and swinging against all odds – Neymar's status as a widely derided figure jars somewhat.

The roots of how we arrived here, like much about this resurgent Brazil side, were probably planted four years ago. Cast as the host-nation's would-be World Cup saviour, Neymar suffered a fractured vertebrae in the quarter-final win over Colombia.

It left him sidelined for the 7-1 semi-final humiliation at the hands of Germany but he was fortunate not to sustain a more serious, life-changing injury from Juan Camilo Zuniga's knee in the back.

In a piece for The Players' Tribune at the end of last year, the Paris Saint-Germain star explained how he was told by doctors that a blow two centimetres to the side of the one he received might have ended his career.

This maybe goes some way to explaining the overwrought reactions to fouls we see from Neymar. He has an unforgettable perspective on just how serious an injury on the field can be, of how precious this dream job of his is and how quickly it can all be snatched away.

He is the most fouled player at Russia 2018, having been impeded 23 times. Most of these have not been dives. Neymar's ankles have taken a battering immediately after his rushed return from a broken metatarsal.

No player at the competition has completed more dribbles, created more chances or had as many shots on target. His goal and pass for the second against Mexico showed a sublime performer shifting towards top gear at the ideal moment.

Neymar's performances should be a cause for a celebration of triumph over adversity and a man trying to settle a score – the sort of universal narrative that appeals at every World Cup.

But then he rolls around ridiculously, harangues another referee and brings himself to the verge of conveniently hysterical tears. The world roots the other way, remembering the man who turned his back on Barcelona for a brighter spotlight, more money and inferior competition, while Brazil hold their anti-hero a little closer and a little tighter.

Neymar's cherished place in the Ballon d'Or pecking order is under threat from Eden Hazard and Kevin De Bruyne when their lavishly gifted Belgium face Brazil in Kazan. Mbappe and Antoine Griezmann also have the chance to state their case for France against a rugged Uruguay in Nizhny Novgorod.

Who could bet against Harry Kane if football actually does, somehow, come home? Luka Modric would undeniably be in contention for the game's biggest individual prize if he leads Croatia to a World Cup triumph to accompany his four European titles at club level.

Neymar's best laid plans have never looked so vulnerable and his theatrics mean plenty would celebrate seeing them crumble.

If he can reassert himself on Friday with a display that reminds everyone why Brazil made us fall in love with football in the first place and park the nonsense that makes many question their affections for the beautiful game, it would be a very welcome development.