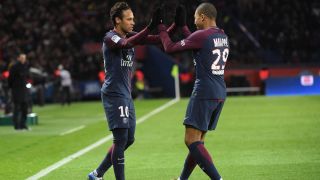 Neymar and Kylian Mbappe would be two big signings for Real Madrid, according to former Spain international Luis Garcia.

Neymar and Mbappe have both been linked with moves to the European champions from Paris Saint-Germain, although Cristiano Ronaldo is reportedly nearing an exit.

Garcia, who played for Barcelona and Atletico during his career, said the duo could be the perfect signings for Madrid.

"They could be [a perfect fit]. I hope not because then they will get a lot stronger," he said Wednesday.

"But Real Madrid is always looking for the best players. Neymar has shown how big he is in this World Cup and Mbappe has been amazing for France.

"They could be two big signings for Real Madrid."

The Neymar and Mbappe talk comes as Ronaldo is linked with a shock move to Serie A champions Juventus.

Garcia was unwilling to be drawn on the reports, saying rumours surrounding Ronaldo were common.

"We hear a lot of rumours every single year. He could go yes, but it is very difficult to try to make a call right now," he said.

"Like I said, he said something in the years before, now we are hearing a lot of comments. We'll see what happens. It's difficult to call it."