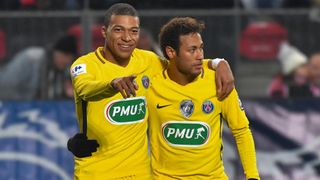 Neymar and Kylian Mbappe have a very good relationship and reports the pair do not get on are untrue, according to Paris Saint-Germain president Nasser Al-Khelaifi.

Mbappe and Neymar have both said they will stay at PSG for the 2018-19 Ligue 1 season, with Real Madrid issuing statements denying they are moving for the duo.

PSG won a domestic treble last term under Unai Emery despite Neymar missing the end of the season with a fractured foot.

And Al-Khelaifi reiterated the attacking pair will be available for Emery's replacement as PSG coach Thomas Tuchel for the new campaign.

"Neymar and Mbappe have a very good relationship. They get on well with each other," the PSG president said.

"Everything else is just made up stories by journalists. It is impossible that there would be bad blood between them. They are happy to play together.

"The reintroduction of Mbappe and Neymar is scheduled for the start of the month. What is clear is neither of them will be going anywhere."

Mbappe won the World Cup's best young player award as France triumphed at Russia 2018, while Neymar could not help Brazil past the quarter-finals, where they lost to Belgium.

"My players were very good during the World Cup," Al-Khelaifi added.

"Brazil had a lot of pressure on them, but France had a fantastic World Cup and deserve to be the champions. Mbappe was incredible and Neymar was at his best despite the injury. He gave his all."