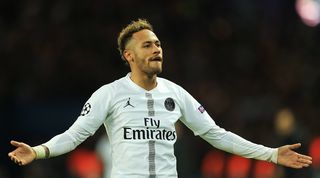 Neymar is eyeing a sensational return to Barcelona this summer, report Sport.

The Brazil international moved to PSG in a stunning £202m deal - still a world-record fee - in summer 2017.

But despite winning back-to-back Ligue 1 titles at the Parc des Princes, Neymar has been frustrated by PSG's failure to reach the latter stages of the Champions League.

The forward also voiced his displeasure at the attitude of some of his younger team-mates following the shock defeat by Rennes in the Coupe de France final.

And according to reports in the Spanish press, Neymar wants to move back to the Camp Nou ahead of next season.

Barcelona are keen to bolster their attacking options this summer, but they are yet to make a decision on whether to submit an offer for the 27-year-old.