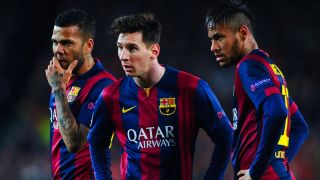 Neymar had to step out of Lionel Messi's shadow by leaving Barcelona for Paris Saint-Germain, according to Dani Alves.

Brazil star Neymar made a world-record €222million move from Barca to PSG last year and the superstar forward has scored 26 goals in 24 games this season.

Alves, an international and PSG team-mate of Neymar's, said the 25-year-old made the right decision in departing the Camp Nou.

"I think he's up there with Messi as the most influential player in world football. The thing is, he had to come out of his shadow a little," Alves told FIFA.com.

"Playing with someone as unique as Leo is the most incredible thing that can happen to you, but there's always that doubt in your mind if it's you that really has the quality or if it's him.

"I always loved playing with him, but he's Argentinian and Ney and I are Brazilians. Sooner or later we had to come up against each other.

"I think you've got a better chance of achieving things individually when you're not so close to a player like him. It was important for Ney's own development and for Brazil for him to follow his own path."

Neymar and Alves were also team-mates at Barcelona before the latter left in 2016.

While Alves said he helped get Neymar to the LaLiga giants, he insisted he played a minimal role in the former Santos star's PSG switch.

"I hardly had anything to do with it, though I was involved when he signed for Barcelona. I gave him some advice and told him about all the good things I’d experienced at the club and in the city," he said.

"But it wasn't like that this time. It was just a case of me getting here before him, though there was a moment when he was unsure about what to do.

"I just told him to follow his heart and be happy. That was the only advice I gave him."