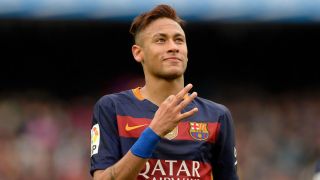 Suarez - who recently returned to Camp Nou after one-year spells with Sevilla and Villarreal - grew up a Barcelona fan during Ronaldinho's days at the club.

And he believes Neymar's game is strikingly similar to that of his illustrious Brazilian compatriot.

"I followed my father and was lucky to grow up with Ronaldinho's Barca," Suarez told Mundo Deportivo.

"Neymar reminds me of the Ronaldinho I saw as a child.

"He is about fantasy, dribbling and technical novelty."

Suarez will also be teaming up with Lionel Messi and namesake Luis Suarez following his return to Barca.

Of that duo, he added: "Messi is undoubtedly the best. I've never seen a player like him.

"He has all the records, and his humility on the pitch makes the difference. He plays for the team and gets better every day.

"Suarez is a natural goalscorer. He's scored for all the teams he's played for."