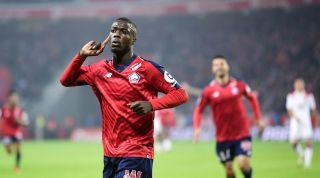 Sunday's 2-0 home defeat by relegated Cardiff sealed a sixth-place Premier League finish for the Red Devils, who are determined to strengthen their squad this summer.

Ole Gunnar Solskjaer will be given money to spend as United attempt to bridge the gap between themselves and champions Manchester City.

And the Norwegian has made Pepe one of his principal targets after the forward's impressive displays in Ligue 1.

The Ivory Coast international has scored 20 goals and provided 11 assists in France's top tier this term.

His superb form has attracted attention from a host of European clubs, with PSG and Arsenal also showing an interest.

United have scouted the player extensively throughout the campaign and are now weighing up a potential bid.