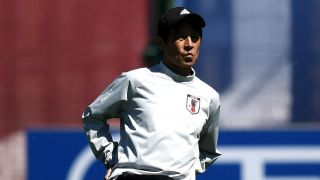 Japan coach Akira Nishino is concerned about the mental wellbeing of his players ahead of their World Cup opener with Colombia after an earthquake hit the Japanese city of Osaka on Monday.

The quake, which struck at 08:00 local time, had a magnitude of 6.1 and, according to Japanese media, has claimed the lives of at least three people and injured more than 200.

News reached the Japan squad in Saransk around the same time as an alarm went off in the team's hotel in the early hours of the morning.

And Nishino is worried that some of the players have been impacted by the two incidents ahead of facing Colombia on Tuesday.

"There was a big earthquake in Osaka early in the morning, so the players were a bit shocked by this incident and they were concerned about relatives," Nishino told reporters at his pre-match news conference.

"Some players were affected. This psychological impact is something I'm slightly worried about. We are consulting with them and I want them to settle down soon.

"And at the hotel there was another incident and so maybe for the players things aren't going to plan, which I'm a little concerned about.

"I thought you might know already [about the alarm incident], but the alarm went off by mistake about the same time as the earthquake.

"I thought the president [of the Japanese Football Association] tried to call me. It carried on for a while and there were some delicate, tired looking players in the morning, that's why I mentioned there was a small incident."

Nishino has only been in charge of the team since April following the surprising dismissal of Vahid Halilhodzic and one of his most notable changes has been to place greater importance on Keisuke Honda than his predecessor did.

And Nishino is confident Honda's move to Mexican side Pachuca has helped him improve, hence why he is now "indispensable" to the national side again.

"Honda moved to Mexico from Europe and he's grown ever since going there, I believe," the coach said.

"He has been used as a national player, but also sometimes missed. But emotionally and technically he is indispensable, which is why I summoned him after meeting expectations in the friendly matches.

"He showed some good effort and I can see that he's really playing to form. I am confident about him."