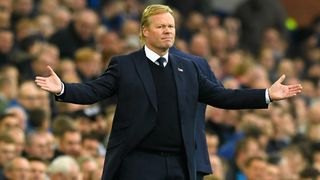 Ronald Koeman insists he will not leave Everton before the end of his contract despite admitting that coaching Barcelona is a lifelong ambition.

The former Barca and Netherlands star said this week that becoming head coach of his old club and national team were two of the remaining "dreams" in his career.

Speculation around a return to Camp Nou for Koeman has increased since Luis Enrique confirmed he will step down from his role as boss of the Catalan giants at the end of the season.

Koeman, however, has stressed he is fully committed to Everton's project.

"I mentioned several times. It's human ambition and it's not changed my position or my contract with Everton," the manager told a news conference on Friday.

"There's no chance that I will leave Everton before the end of my contract.

"My past is always linked. I can't stop this. If I can, I will, because I'm Everton manager. But when I was at Southampton there were some stories about Barcelona."

Thank you for all the kind messages for Aaron. We are supporting him through this and his family has appealed for privacy at this time.May 3, 2017

Everton confirmed this week that winger Aaron Lennon is receiving treatment for a "stress-related illness" after Greater Manchester Police stated a 30-year-old man had been sectioned under the Mental Health Act.

The news has prompted a number of past and present players to offer their support to Lennon and encourage football to do more to combat the dangers of depression and other mental illnesses.

Koeman is eager to keep the details of Lennon's recovery process private but accepts that the prevalence of social media makes it tougher than ever for players who are in the spotlight.

"The club mentioned that Aaron has a stress-related illness and it's a private situation," he said.

"We have enough people working in different functions in the club to help players, even with these kinds of problems.

"The whole social media is different to how it was 20 years ago. Of course there's more pressure. There's more football, more games, it's really tough for every football player.

"Of course we'd like to see him back but the most important thing is for him to get back to like he was. Life and health are more important than football."

Koeman, whose side face Swansea City in the Premier League on Saturday, added that forward Arouna Kone will leave the club when his contract expires.

"Arouna will finish his contract and will leave the club at the end of the season," he said.