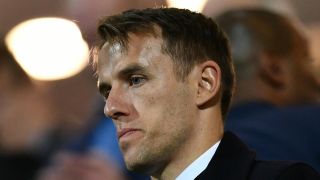 Neville deleted his Twitter account shortly after his appointment was confirmed on Tuesday, when historic tweets resurfaced that were criticised as being sexist.

Kick It Out, a prominent organisation aimed at promoting equality and inclusion in football, expressed concerns over the former Manchester United defender's appointment.

But in a letter replying to Kick It Out posted on Twitter, FA chief executive Martin Glenn said checks on Neville had been carried out before he was given the job.

"The background vetting highlighted some but not all the historic social media comments that have been brought to light," Glenn said. "A thorough discussion about our expectations around standards and culture was part of the process.

"I can also confirm that the assessment of the FA's integrity/regulatory team is that those comments would not meet the threshold for issuing a charge.

"Phil will be educated on all aspects of the FA's regulatory functions and his responsibilities. He will also be warned that any future comments that are deemed to cross the charging threshold will be treated with the utmost seriousness and may lead to disciplinary action."

Aside from the controversial social media posts, the FA - which announced the adoption of a 'Rooney Rule' process earlier this month - has been criticised for failing to appoint a woman to the coaching role.

The Rooney Rule was not in effect for the appointment but Glenn confirmed no black or ethnic minority candidates had applied, while outlining that of the six candidates who were shortlisted for the role, four pulled out of the running due to personal reasons.

Neville's predecessor Mark Sampson, who led England to a semi-final spot at the 2015 World Cup, was dismissed last September after evidence was uncovered of "inappropriate and unacceptable behaviour" during his time with Bristol Academy.